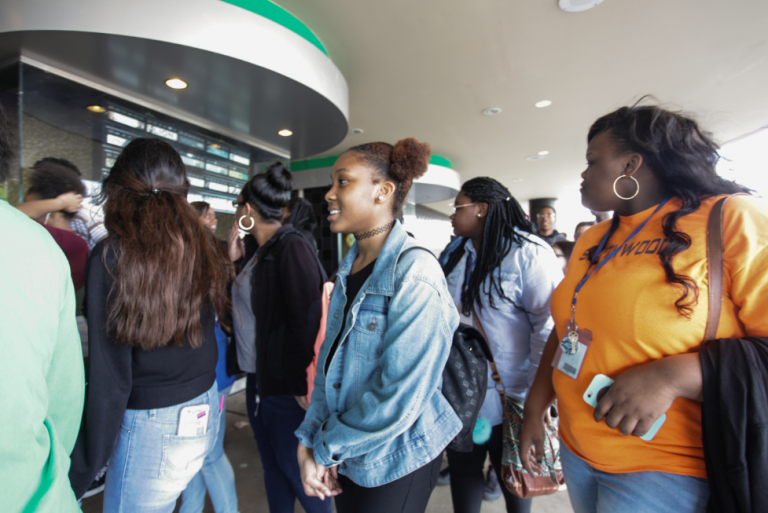 Biotechnology Magnet Academy students in Southwood High School recently boarded buses for Tinseltown in Shreveport, where they were taken on a BRF sponsored field trip to see the biographical drama “Hidden Figures.”

The Hollywood production about the heroism of a group of African American females at NASA is relevant to the mission of the magnet program, which focuses on biotechnology and the STEM (Science, Technology, Engineering and Math) disciplines.

Fifty percent of Biotech Academy’s students are African American females, an important metric when compared to a 2015 study.

According to a National Science Foundation 2015 report on Women, Minorities, and Persons with Disabilities in Science and Engineering, African American females make up just two percent of science and engineering’s employment base.

Biotech Academy’s original charge, when BRF, Southwood High School and Caddo Parish Schools, and other community partners came together in 2006 to launch the magnet school, was to help build a regional knowledge based workforce to enrich Northwest Louisiana and attract new industry, while simultaneously lifting Southwood, which had a ‘D’ ranking in the school system.

Today the school’s ranking is a ‘B,’ and Biotech has graduated just under 100 seniors who’ve spent four years learning a rigorous biotechnology curriculum.

The first freshman class numbered just 25, and in 2016, the number of enrolling freshmen had tripled to 77.

While growing in student enrollment, Biotech Academy is bucking trends for minorities in science, and college enrollment rates.

Eighty-three percent of Biotech Academy seniors enrolled in college last year, and this year, 71 percent of the program’s enrollees are African American females.

“The tide is still turning for underrepresented minorities in STEM disciplines. We are happy to report that 100 percent of our female students who graduated last year went on to college,” said Cathy Williamson, Biotechnology College Navigator, whose role at the program is to help Biotech students pursue advanced education in biotechnology, including securing laboratory internships at LSU Health Sciences Center Shreveport (LSUHSCS), ACT preparation and college enrollment.

“We have such talented students at Biotech Academy, which ensures all demographics – particularly female students, minorities and students who are first generation college-bound – have an avenue to pursue STEM and later on enter the field. We help eliminate the barriers that still exist for science-based education and industry,” Williamson said.

Southwood High School’s Principal, Jeff Roberts, has been a part of Biotech Academy since its beginning. Roberts was Caddo Schools’ district math science and technology coordinator when he moved to Southwood for another position and then later became the high school’s principal.

“Biotech Academy has done much to lift Southwood High School’s profile. Our Biotech Academy seniors last year earned more than $500,000 in scholarships. Whereas the state’s college enrollment rate is just under 60 percent, Biotech’s is over 80. The culture here as a school has improved, and the field trip our students attended to watch the film “Hidden Figures” is a way of celebrating all the accomplishments that have been achieved these 10 years,” Roberts said. “Any time we can expose our students to greater possibilities, whether through a rigorous math and science curriculum like the one at Biotech, or through a movie where the characters overcome adversity and the odds – like many of our students already have – we take that opportunity.”

BRF led the efforts to raise over $1.5 million to launch Biotech Academy, with two fully functional wet labs within the school, and to sponsor the Biotechnology College Navigator position and other aspects of the academy and BioStart.

Biotech Academy’s open enrollment begins in March, and BioStart participants are selected from among academy seniors.

Biotech Academy is a magnet program open to all students finishing eighth grade in Caddo Parish.

Visit BRFLA.org/projects/edventures to learn more about Biotech Academy and BRF’s other education initiatives.