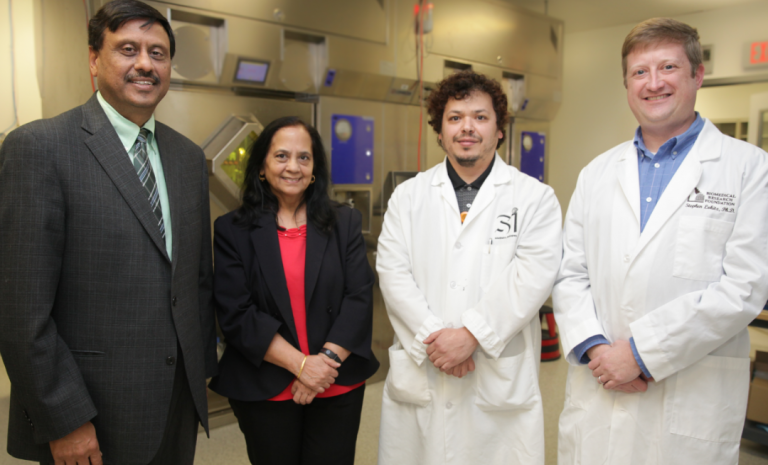 A recent study published by Dr. Pradeep Garg, Executive Director of the Center for Molecular Imaging and Therapy (CMIT) in Shreveport, explores the distribution of nicotine in the human body.

Adult smoking in the United States has decreased substantially since the hallmark 1964 US Surgeon General’s report. Nonetheless, 40 million Americans still smoke regularly, and approximately 400,000 people die each year due to illnesses directly associated with smoking.

Nicotine has been identified as one of the primary chemicals responsible for tobacco addiction in humans, and more recently, there has been a steady rise in the use of newly developed nicotine delivery devices, such as e-cigarettes, to replace cigarettes. Their use has surpassed any other tobacco product, especially among high school students.

“There is growing concern among the scientific, medical and regulatory communities over the impact of nicotine consumption on human health,” said Dr. Garg. “And it would be shortsighted to say that just the lungs are impacted by nicotine. In addition, there are unanswered questions such as why some people get addicted to smoking and some do not.”

To further understand the distribution of nicotine in the human body, Garg’s team acquired whole body PET images using a radiopharmaceutical research chemical called C-11 nicotine, and found that besides in the lungs, nicotine also gets deposited in several other organs such as the brain, liver, spleen and muscles.

Understanding the distribution of this chemical in the human body can help in monitoring the efficacy of smoking cessation therapy as well as in developing new drugs to combat smoking addiction. In addition, C-11 nicotine PET can also play role in studying certain neurodegenerative diseases.

The current study’s results show the whole body distribution pattern of the PET imaging agent C-11 nicotine and demonstrate how this probe could be used effectively and safely to perform clinical trials. The study also includes discussion on low radiation risk associated with C-11 nicotine administration and the practicality of performing multiple PET studies in a given subject while maintaining regulatory compliance.

The recently published study in the Journal of Nuclear Medicine is part of a larger body of work Garg has led in the study of addiction.

CMIT is a research organization devoted to developing novel radiopharmaceuticals which can lead to improved diagnosis and therapy for a wide range of diseases. CMIT actively performs radiopharmaceutical development, preclinical research, translational research as well as clinical imaging.

Authors of the studies related to Biodistribution and Radiation Dosimetry of C-Nicotine from Whole-Body PET Imaging in Humans were Drs. Pradeep K. Garg, Stephen J. Lokitz, Rachid Nazih, and Sudha Garg. The studies were conducted in conjunction with the Department of Radiology, Wake Forest University Health Sciences, Winston Salem, North Carolina; and BRF in Shreveport, Louisiana and are published in J Nucl Med. 2016 Sep 22. pii: jnumed.116.180059.