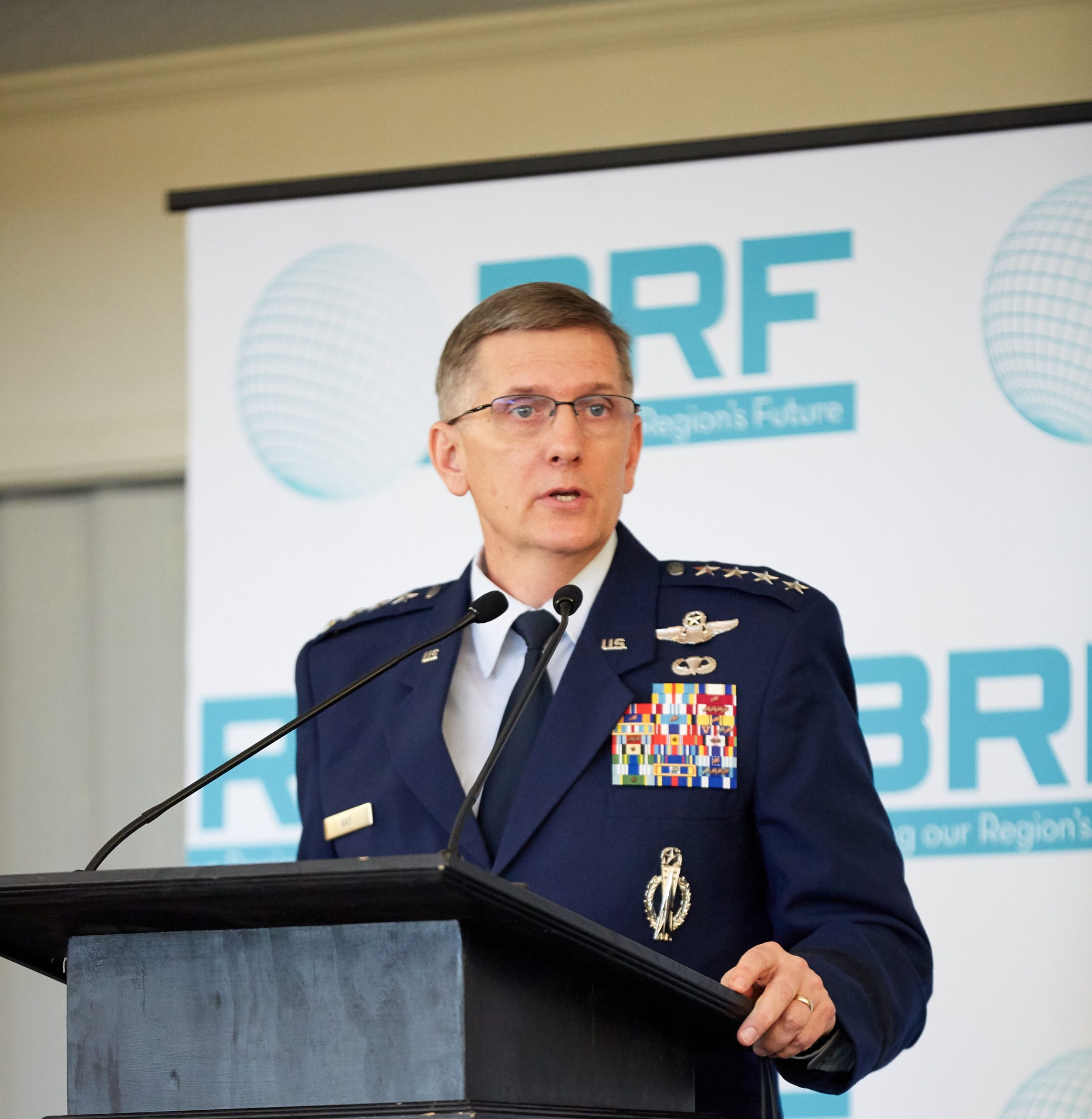 Community hears from General Timothy M. Ray at BRF Annual Meeting
Gen. Timothy M. Ray, Commander of Air Force Global Strike Command headquartered at Barksdale Air Force Base (BAFB), served as the keynote speaker at BRF’s Annual Meeting on Wednesday, Nov. 6. at East Ridge Country Club in Shreveport.
To continue its mission of growing our region’s economy and to support initiatives which contribute to economic development, BRF is highlighting the impact of Barksdale Air Force Base to the economy of Northwest Louisiana as well as sharing the important objectives of Global Strike Command and celebrating the airmen who serve our nation.
Special guests of the event included BAFB senior staff and service members.
Barksdale Air Force Base is the largest employer in the Shreveport-Bossier City area, with more than 14,000 employees. Of those, 1,188 are civilian employees – an important portion of our local workforce that is engaged in supporting the goals of the U.S. Air Force. As an invaluable institution in our community, BAFB had an approximately $807.5 million economic impact on the Shreveport-Bossier City area in 2018. To pursue the continued success of Barksdale, BRF is encouraging our community to support this critical economic engine.
The top commander at BAFB, Gen. Ray was commissioned into the U.S. Air Force after graduating from the U.S. Air Force Academy in 1985. He held operational flying assignments in the T-38 and B-52 aircraft, and has served as an instructor, evaluator pilot and squadron commander. He has also flown the B-1 and commanded the 7th Bomb Wing at Dyess Air Force Base. Gen. Ray had various staff assignments at the major command, Headquarters U.S. Air Force and combatant command levels as well as served as Commanding General, NATO Air Training Command – Afghanistan, NATO Training Mission – Afghanistan/Combined Security Transition Command – Afghanistan and Commander, 438th Air Expeditionary Wing, Kabul, Afghanistan. Before coming back to Barksdale, Gen. Ray served as the Deputy Commander, U.S. European Command, Stuttgart, Germany.
Air Force Global Strike Command is responsible for the nation’s three intercontinental ballistic missile wings, the Air Force’s entire bomber force, including the B-52, the Long Range Strike Bomber program, Air Force Nuclear Command, Control and Communications (NC3) systems, and operational and maintenance support to organizations within the nuclear enterprise.
Gen. Ray spoke to BRF stakeholders about Air Force modernization and innovation initiatives.
“Our command and base have a long and historic past; but, I’m more thrilled to discuss where we’re going in the future,” Gen. Ray said. “We’re innovating and modernizing like never seen before. We’re reorienting our staff and processes for the challenges ahead. Air Force Global Strike Command is the cornerstone of the security structure of the free world. This could not be more evident than today with the dynamic security environment unfolding with great power competition.”
“The success of Barksdale Air Force Base is crucial for a positive economic future in Northwest Louisiana,” said BRF President and CEO John F. George Jr., M.D. “BRF is pleased to back the mission of Global Strike Command and the men and women of the U.S. Air Force. As a hub of innovation in our community, BRF stands ready to support the Barksdale community through its strategic initiatives in economic development.”
In addition to supporting the mission of BAFB at its Annual Meeting, BRF celebrated its accomplishments from the previous year. In 2019, BRF oversaw the groundbreaking of its new $14.2 million Center for Molecular Imaging and Therapy (CMIT) on Kings Highway in Shreveport –– bringing new jobs and opportunities to treat diseases such as cancer and dementias, the $1.2 million expansion of its North Louisiana Entrepreneurial Accelerator Program (NorLEAP) –– providing startup business assistance across 21 North Louisiana parishes, the creation of its first associate degree in advertising design through the Digital Media Institute at InterTech (DMII), and Envision Research’s contracting with Pharmaceutical Product Development (PPD) to further develop community physicians for clinical trials.
Since its founding in 1986, BRF and its business units have supported more than 316 companies in more than a dozen industries, creating or retaining 4,184 direct jobs with an average annual salary of $51,000.
BRF has received Caddo Parish millage funds to support these economic development and diversification initiatives. To date, for every $1 received from millage funds BRF has generated $60 in capital.
More about BRF
BRF is an economic development organization establishing North Louisiana as a preferred destination for high growth initiatives. Diversifying the region’s economy is its mission.
It fulfills this mission through initiatives that support community, regional and national needs in health and medicine, resources for entrepreneurs and the development of a science and technology-based workforce.
We use cookies on our website to give you the most relevant experience by remembering your preferences and repeat visits. By clicking “Accept All”, you consent to the use of ALL the cookies. However, you may visit "Cookie Settings" to provide a controlled consent.
Cookie SettingsAccept All
Manage consent