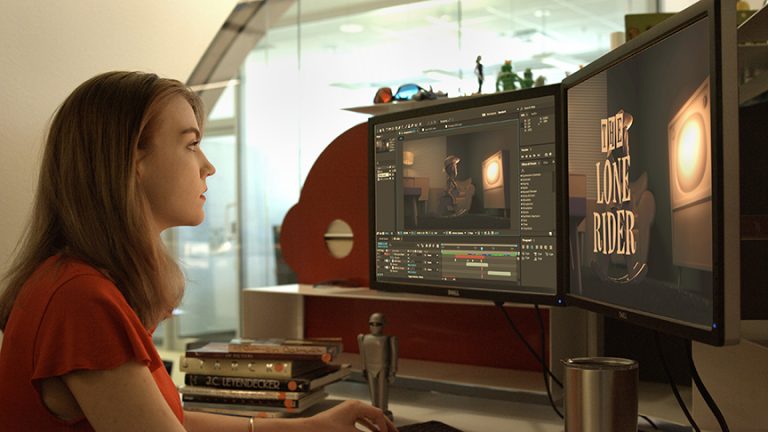 Two Digital Media Institute at Intertech (DMII) graduates recently completed internships at Moonbot Studios in Shreveport, and more are planned between the institute and the animation, gaming and storytelling studio for the future.

Buller’s time with Moonbot was spent applying her certification in a real-world setting, receiving mentorship in the areas of 3D modeling and lighting from the studio’s technical directors while creating a new project for her portfolio.

“For my project, my goal was to create a scene reminiscent of the work produced at Moonbot: something that would recall childhood elation,” Buller said. “My inspiration came from a photograph of my father, when he was two, sitting on an antique rocking horse, wearing only a cowboy hat and diaper.”

Buller plans to continue freelancing and growing her skills. She hopes to ultimately find full-time employment in the industry.

Culpepper’s area of passion and expertise is in rigging, the process of adding a skeletal-like structure to characters, a map that allows animators to make the characters’ movements and actions truer to life.

During Culpepper’s internship at Moonbot he was assigned a character to be rigged, a feature that would be built into his own portfolio.

“The people at Moonbot showed me some tricks along the way. There are a million different ways to achieve the right result. It’s highly technical and it was great to have them there to answer my questions,” Culpepper said.

Once Culpepper completes his portfolio work, he’ll begin to apply in the local job market.

“I was able to learn a lot about this industry at DMII, giving me perspective in different areas. Even if you go into a niche like rigging, you know a little bit about what other people in the industry do. My interest in animation brought me to DMII,” Culpepper said. “I’ve never been a fan of the traditional liberal arts school system. This approach was more focused.”

Digital Media Institute at Intertech launched two years ago as a self-contained program licensed by the Louisiana Board of Regents offering a highly specialized, accelerated course in digital media such as animation, motion capture and film technology. This year DMII started the game development program, offering cutting edge training and development experience.

DMII graduates could go on to work for AAA game studios, regionally or independent game developers and interactive studios.

“We expect to see great things out of Anna and Aaron, and their time at Moonbot Studios will be invaluable in their future careers. Equipping students like them to be able to excel and innovate in creative, collaborative environments is what we do at DMII,” said John Miralles, DMII Executive Director. “We’re also equipping the next generation of entrepreneurs in this industry.”

Visit www.DMI-intertech.org to learn more about DMII. Once yearly enrollment is now open.

About DMII-
Digital Media Institute at InterTech is focused in digital media education offering training on industry-grade hardware and software. DMII offers two intensive model certificate programs at an accelerated speed from leaders in the industry, at a reduced tuition rate. This initiative of the Biomedical Research Foundation is housed at InterTech 1 in Shreveport.