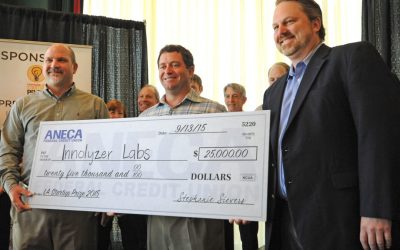 INNOLYZER LABS TAKES HOME STARTUP PRIZE VICTORY
ADAM DUVERNAY
ADUVERNAY@GANNETT.COM
photo by Stan Carpenter/The Times
Another prize is in the bag, and no one walked away a loser. The Louisiana Startup Prize concluded Sunday with the announcement Innolyzer Labs would take home $25,000 cash; $10,000 worth of marketing services from Williams Creative Group; $10,000 worth of accounting services from Heard, McElroy and Vestal; one free year of office space in the American Tower; and a $5,000 corporate video provided by Fairfield Studios. The Innolyzer Labs team included John Chidlow, Chris Kevil and Kevin Pavlick. The company plans to launch a “lab-on-a-chip,” a product for hydrogen sulfide detection. Its LOAC device, about the size of a cigarette, will detect the molecule in liquids and is designed as a medical or general analytical device.

“We kind of started doing this thing just to network and meet some people. It’s been a great experience and a lot of fun,” Chidlow said. “This has been a really collaborative effort and it’s been a chance to get to know each other and figure out what we’re doing.” The other teams — Nanopore Diagnostics LLC, Beau Vodka, RNvention and Tri-D Dynamics — also impressed investors participating in the business competition. All got expressions of serious intent from investors and at least two should soon hear “very good news,” according to Startup Prize founder Gregory Kallenberg.

Everyone who spoke at the Petroleum Club announcement event Sunday agreed that’s really the point of the competition — to make connections, advance business strategies and innovate together.

“With all the entrepreneurs involved, if you were a member of the Top 5 you had advocates going into that room. Everybody in the Top 5 had people pulling for them. You already were winners when you went in,” said Williams Creative Group President Judy Williams.