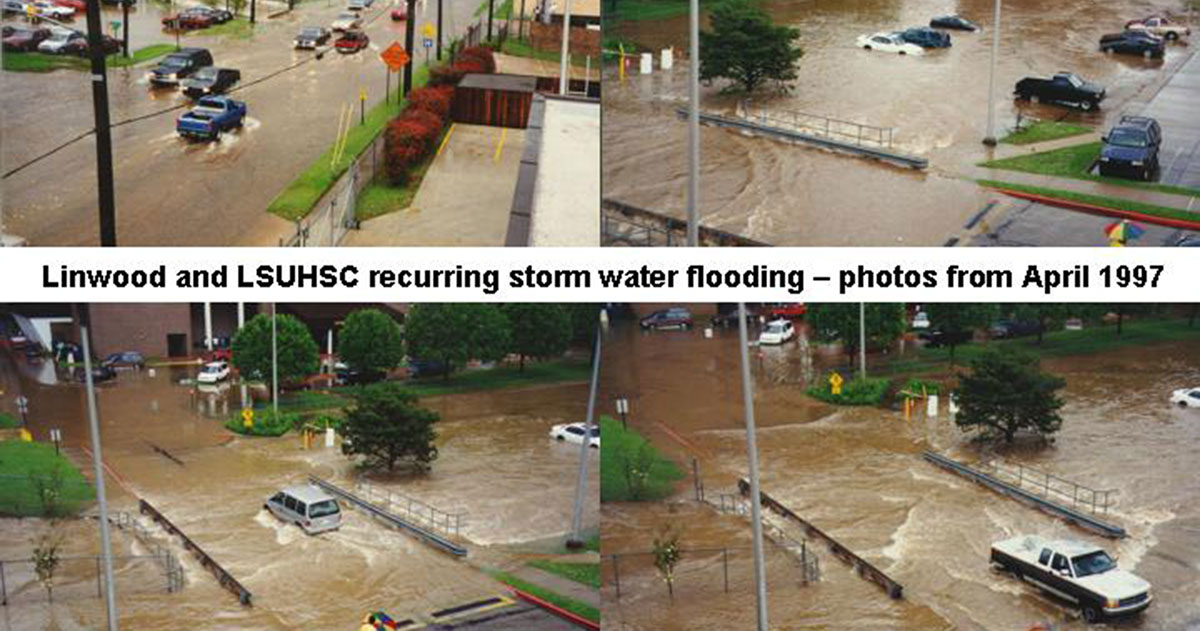 The City of Shreveport has been awarded $5.36 million for flood mitigation projects around the flood prone Ockley Basin in central Shreveport. The application, jointly completed by the City of Shreveport and BRF, was the only award in Caddo Parish and Region 1 of the Louisiana Watershed Initiative. The Coordinating and Development Corporation serves as the Region 1 fiscal agent for the Louisiana Watershed Initiative.

One of 16 funded projects around the state announced at the end of May by Louisiana Gov. John Bel Edwards, the Ockley Basin project will fund clearing, grading and earthwork to construct flood storage areas in low lying areas in the basin at Mansfield Road and Texas Avenue, Avery Street and Lawhon Street, and Forest Park. The Ockley Basin flows down from the Mansfield Road and Texas Avenue area, through the Ochsner LSU Health Hospital and LSU School of Medicine campus, as well as Forest Park Cemetery, and continues in drainage ditches at Mall St. Vincent and Betty Virginia Park, eventually draining into Bayou Pierre at Gilbert Drive and Fern Avenue. The storage area near Mansfield Road and Texas Avenue also is planned to include landscape buffers and a pedestrian walkway. 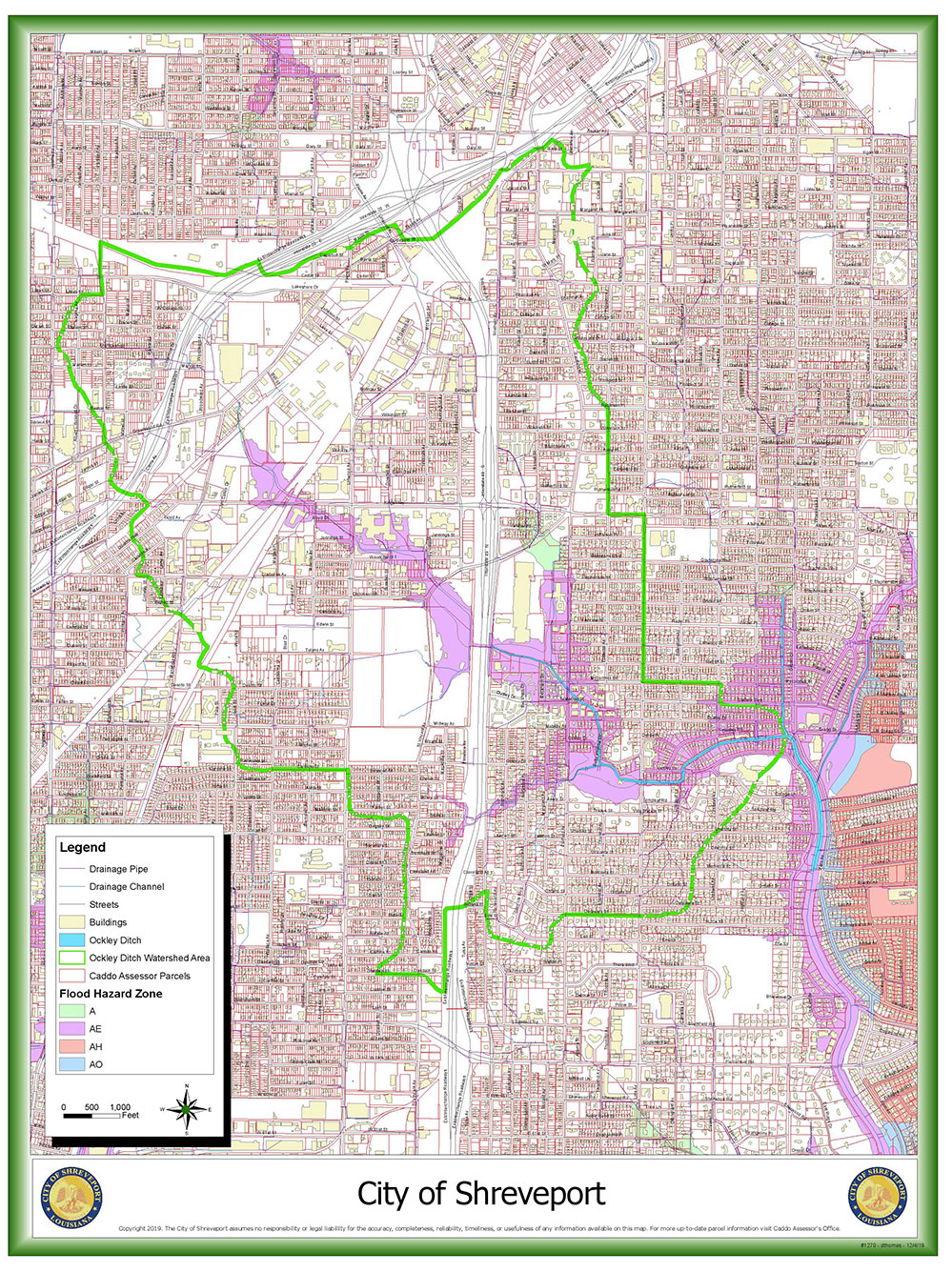 The Ockley Ditch watershed – outlined in green – includes FEMA special flood hazard areas – noted by purple shading – and runs through the Shreveport Healthcare and Development Corridor and the Caddo Heights, Highland and South Highlands neighborhoods. Click the map to view a version with zoom functions.

The flood sensitive Ockley Basin contains 636 structures – including homes, businesses and critical facilities such as Ochsner LSU Health Hospital, LSU School of Medicine, Shriner’s Hospital for Children, and other major institutions such as the Shreveport main U.S. Post Office, the UPS distribution facility, the Catholic Diocese, and BRF’s InterTech Science Park with 26 tenants. The facilities impacted are on or near Shreveport’s Healthcare and Development Corridor on Kings Highway, a focus point for the City of Shreveport, BRF and other parties planning for future economic development and enhancement along the corridor. 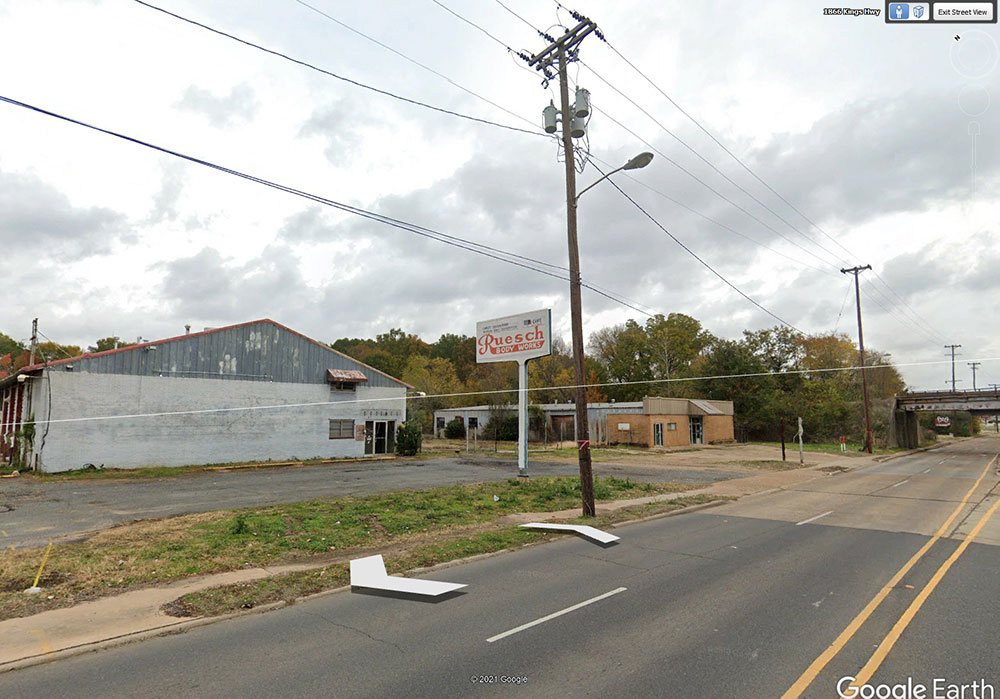 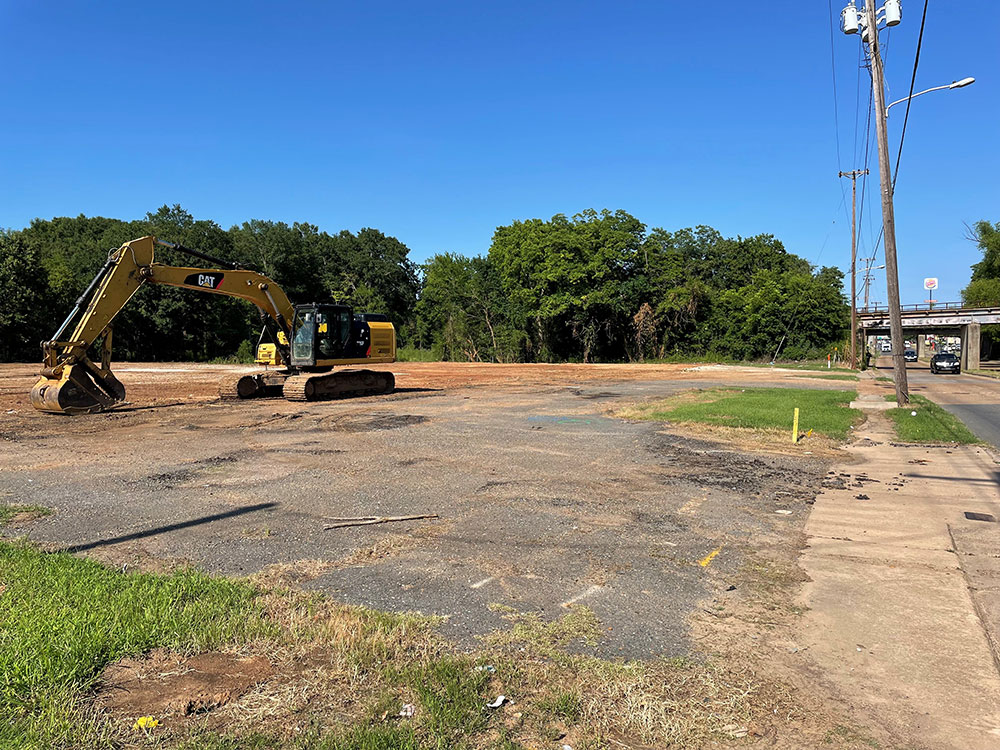 BRF has recently demolished and cleared the site of the former Ruesch Body Works in its InterTech Science Park on Kings Highway to begin improvements in the Shreveport Healthcare and Development Corridor.

“This multimillion-dollar project will bring long-awaited relief to an area that has experienced recurring flooding in recent years,” Shreveport Mayor Adrian Perkins said. “The project has been a top priority for our Shreveport community for years and is ready to be constructed. Through the Louisiana Watershed Initiative, this funding allows us to immediately move this project forward to help make our community more resilient in the face of future flooding. This area is important to Shreveport’s economy, critical services and future development.”

One of two major construction projects occurring in the Shreveport Healthcare and Development Corridor, BRF’s new Center for Molecular Imaging and Therapy (CMIT) is scheduled to open in late 2021.

“We congratulate the City of Shreveport and the community for this win, which was the result of 18 months of dedicated teamwork in developing the grant proposal as well as financial investment to develop preliminary modeling and engineering data by both the City and BRF. It is important to see our region advancing projects like this one in conjunction with U.S. federal agencies, our Louisiana congressional delegation, Governor and City,” said John F. George Jr., M.D., BRF President and CEO. “We must continue to work together to protect and grow our assets like the Ochsner LSU Health Hospital and the LSU School of Medicine and other entities along the corridor to position them for growth and future development.”

Eligible projects were submitted to the Louisiana Watershed Initiative by local and regional public entities. The goal of Round 1 was to fund low-risk, high-impact projects that will significantly reduce regional flood risk and improve the natural functions of floodplains without adversely impacting surrounding communities. The funding opportunity is part of the State’s action plan to spend $1.2 billion in federal mitigation funds.