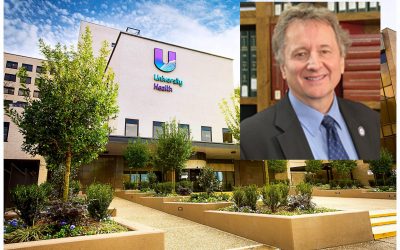 Senator John Milkovich provided the following column to the Shreveport Times for publication on Sunday Nov. 5.

BRF is the community organization founded over 34 years ago that owes much of its success to the blood, sweat and tears of a Shreveport legend, and my distant predecessor as state senator for District 38, Virginia Shehee.

BRF is not an out-of-state corporate hospital chain. Nor is it a holding company comprised of distant stockholders, formed to enrich a few stakeholders.

BRF was created in this community and is constituted by members of this community, and its work is done by this community. Ultimately, BRF is the embodiment of the vision that Virginia and other BRF leaders had for their community: making northwest Louisiana better for future generations.

In 2013,  Gov. Bobby Jindal ended the LSU Medical Center’s time as a state-run hospital and pushed for a public-private partnership. In June 2013, over 3,200 pink slips were sent to LSU-MC employees. North Louisiana stood to lose its largest safety net hospital, in continuous operation since 1889, health care for hundreds of thousands of north Louisianans, and an annual economic impact in excess of $1 billion.

When the state dropped the curtain on the hospital as a state operation, exactly one group accepted the challenge to keep the hospital alive — BRF, the community non-profit formerly led by Virginia Shehee.

Beginning in 2013, a small group of community leaders, medical executives, entrepreneurs, physicians and pastors, along with thousands of dedicated local employees, rolled up their sleeves to keep the hospital alive, take if off life support, stabilize it — and restore it to health.

Beginning in 2013, BRF’s chief executive officer, Dr. John George, worked a year without pay to revamp the hospital as a private entity. BRF renamed the medical complex University Health, and it transitioned UH from a public to private hospital in 135 days.

University Health reduced administrative staff to streamline operations. It adjusted employee benefits to save costs. It instituted rigorous metrics to measure the quality and quantity of medical care. And it implemented a state-of-the-art digital records systems.

It has reduced the clinic appointment backlog from more than 12,000 patients in the last year the hospital was run by the state to less than 1,200.

It has slashed the wait to see a specialist, or obtain MRIs, CT scans or radiation therapy from as long as 60 days to as short as a single day.

And it cut has ER wait time, reducing by half the number of ER patients who leave without being seen.

University Health is blazing trails in the provision of pre-natal care. It has re-obtained Level One trauma care status, lost while the hospital was in state control, once again establishing it as one of the best trauma care centers in the south-central United States. It has achieved certification as a top provider of emergency care for stroke and heart attack victims. It has received the Gold Seal of Approval from JACO, the top hospital credentialing organization in america.

The hospital, with the efforts of dedicated LSU Health Shreveport medical school physicians, is recognized as the region’s outstanding critical care center for anyone injured in severe industrial accidents, serious car wrecks or violent crimes, and for any citizen suffering a stroke, heart attack or cranial embolism — regardless of the patient’s means.

BRF pays the state $50 million a year to rent the hospital.

BRF has paid LSU Health Shreveport over $350 million for the services of its physicians. In 2016 alone, University Health paid $80 million to the medical school.

In total since 2013, University Health has paid over $600 million for hospital renovations and medical equipment, rent to the state, and fees to the medical school for physician services.

When federal match dollars are calculated, BRF/University Health has generated over $900 million for state government over the last four years — money that was not available before privatization.

University Health is the most economically efficient of the eight public-private partnership hospitals in the state, but receives the lowest per-patient state reimbursement of any public-private hospital in Louisiana.

It is no less remarkable that University Health, a safety-net hospital, has paid $350 million to  the school — in the last four years. While the charity hospital in New Orleans got a new $1.3 billion hospital in 2014 under Gov. Jindal, BRF pays the state $50 million a year rent on a 65-year-old structure that has $150 million of deferred maintenance.

Critics have attacked University Health for sometimes operating on thin financial margins. Some of these same outside voices have created the very problem about which they complain, by pulling political strings in Baton Rouge to delay, reduce and thwart state funding of University Health.

Recent revelations uncover that a handful of power players may have plotted behind the scenes to “accelerate the demise” of BRF as the operator of University Health. There are many terms that could be used to describe an agenda to turn out the lights on a community effort, supported by hard work and prayer, to improve health outcomes, provide medical choices to the local citizens and bring a longstanding medical institution back from death’s door. “Good Government” is not one of them.

University Health respects the vital contributions — and does not “accelerate the demise” — of other regional health care providers, including the medical school.

As Committee of One Hundred Vice President Robert Mills has stressed, our community needs its private hospitals, its medical school — and University Health. And, our community needs teamwork among all of them: “Nothing we know of prevents the state, BRF and LSUHSC from . . . agreeing to fair and equitable arrangements to properly fund . . . University Health and LSU Health Science Center.”

John Milkovich is a Louisiana state senator from Shreveport.